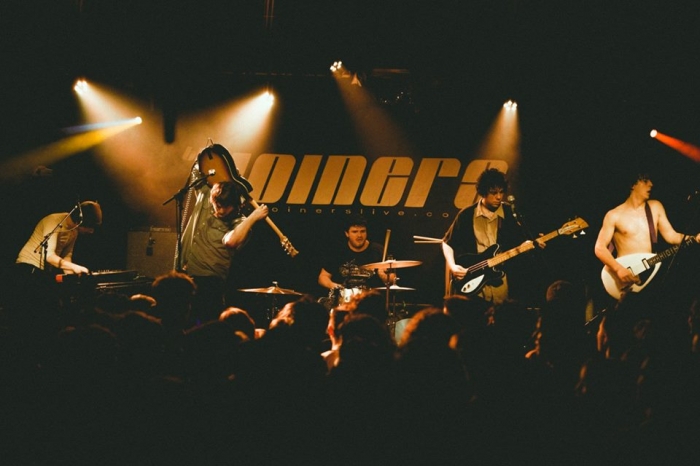 Chicago based Twin Peaks took to The Joiners stage on the 10th of February 2017. One out of their two UK shows. Making the lucky few in the room very grateful.

The shimmery, energetic American skater style of Twin Peaks transported the Friday night mid-February crowd to the sunny burbs of California. Merely one second into their first song and the crowd erupt. Becoming a bubble bath of teens, the audience clamber onto each other’s shoulders much to the delight of Twin Peaks. Holding up sweaty strangers all sharing admiration for Twin Peaks.

This band were born the authentic, refreshing way back in 2009. Members Cadian Lake James, Clay Frankel, Jack Dolan, Connor Brodner, Colin Croom formed the band in high school. The history between the boys on stage is very evident with the electric atmosphere between the lads as they play together.

The band float threw the set with a fun and relaxed style. Although this said the sound between the band of high school friends is extremely tight, the music itself may be very relaxed but the determination of this band to become popular across the pond is evident. As they watch from The Joiners stage in amazement as the sold out room continues to go wild. And the heat in the room begins to increase as the crowd surfing continues.

Twin Peaks have said to have been influenced by bands such as The Black Lips and The Pixies and going from their live performance this can be confirmed.

The band released their third album Down In Heaven in the 13th of May 2016. An album I would recommend purchasing in order to inject some cali sun into the cold early British months.