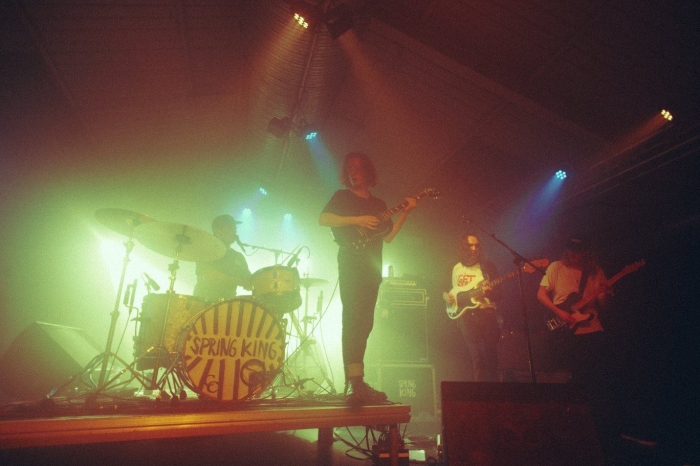 The three-year-old, London based The Big Moon had the job, along with Get Inuit , to open up for Spring King.

Warming up the atmosphere of Engine Rooms, Southampton was made to look easy with the confidence pouring of the stage from the female four piece. felt as though they were the headline show.

The set is sprinkled with a lot of communication from lead singer, Juliette Jackson, to the crowd. Each sentence coming from the stage confirmed the comfort that the band felt up stage and that the girls are determined to create a rope of connection between crowd and band. The humble and friendly attitude from The Big Moon was highlighted again when after the set they were found by their merch stand meeting and greeting with fans.
Shortly after The Big Moons set it was time for headliners Springs King. With a nice nod to new music bass player James shows of his Get Inuit T-shirt, showing support for their own support.

From the first drum beat a whirl pool of fans unravels in the centre of the crowd. Already screaming every lyrics back to the band this gig is already set up to be a good one.

The Macclesfield post punk band have the crowd on side already with only one album out named Tell Me If You Like. Each song has a chant to it which the crowd do not hold back getting involved with. Impressively to have one album and be from the other side of England this band are on the road to becoming something very special with every person on every shoulder fixated on the four piece.

From the live set it seems like there are glimmers of other bands entwined in Spring King sound. Some songs seem to have a Slaves and The Black Lips influence, but not to the point where the band feel like a tribute, there is still a freshness in the air.

The show ends with a huge eruption of City as Lead Singer, Tarek Musa reveals ‘Southampton this has been the best show we have done.’ An announcement that the crowd may just agree with too.

Expect The Big Moon's album Love in The 4th Dimension to be out on the 7th of April.